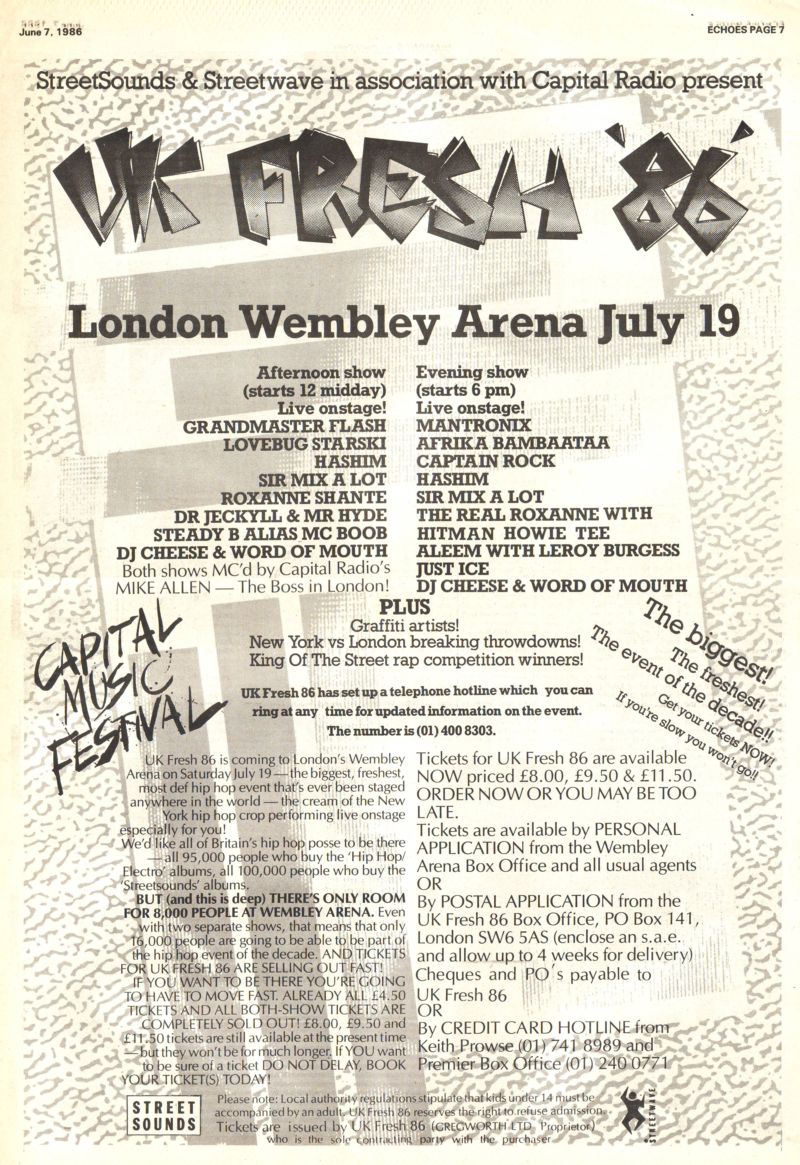 If you are from outside of the UK, this may be the first time youve heard of the UK Fresh 86 shows. These were at Wembley Arena [NB: ARENA Rap in the UK in 1986] and were billed as 'The event of the decade'. Following the Fresh Fest template on offer in the US from the previous year, and with only 16000 people witnessing what became a pivotal performance of iconic 80s artists, this has arguably become the largest and most important LIVE event in old school UK Hip Hop history, and was part of the Capital Radio Music Festival.

Household name Dr Dre, performed alongside [fellow NWA member DJ] Yella and the rest of the World Class Wreckin' Cru, as did park jam pioneers Grandmaster Flash, Lovebug Starski & Brucie B. Bambaataa and the Family also played as did the legendary Mantronix with MC Tee! One of the most incredible DJs to walk the planet, Cutmaster DJ Cheese, scratched his way through his set along with KMC and MC Original G, the unsung heroes from the Word of Mouth crew as did pioneering space age sounds of Captain Rock. Tickets were available for both an afternoon and an evening show, but so many kids in the UK were affected by it as the festival energised future generations with its impact. It also made British fans aware that Rap and Hip-Hop wasnt just blastin outta boxes in New York, with Sir Mix-A-Lot from Seattle and World Class representing LA.

The World Class performance is polished and Dre is tight on the cut. Sir Mix-A-Lot drops his novelty track and retains credibility with b-side bangers. Mantronik gets busy on the version excursion, triggering drum machine pads in addition to whats on the decks. Steady B is outta breath at times and Roxanne is impatient while Howie Tee enjoys his time behind the wheels. But all of the performances are to old school Hip Hop entertainment. And of course, as youll hear, the whistle posse was in full effect at this party.

The Bambaataa performance is reminiscent of a school disco, it's a classic show, it's an alluring and appealing snapshot of the period, but be warned, it was 86, and it sounds insanely amateur at times. Espcially when Bam and the Soulsonic Force take to the stage. Maybe Bam was busy during rehearsals...it's clunky in its arrangement, the sound is all over the place, the levels are waaay off and if you have a keen ear, or affection for these classics, you'll recognise the keyboard riffs and synth licks, but only just.

HUMUNGANOID propers to Mark Devlin for supplying this incredible collection of recordings. It's a compilation of pause tape recordings, but the majority of the segues are intact. As ever, massive respect to Simmo for keeping the spirit of Allen's Army preserved. You can find out alot more info about the festival that was broadcast on Capital Radio over the course of the 86 August Bank Holiday weekend at http://www.mikeallencapitalradio.com/

Grandmaster Flash And The Furious Five

Grandmaster Flash And The Furious Five